I wasn't nearly go to blog tonight as I had a very late one last night........ooohhhh not good for a Monday night - got home right on midnight!!! But was a great night catching up with our friends from Perth Kylie + Rachael. Also putting out a BIG hi to Evalina!! 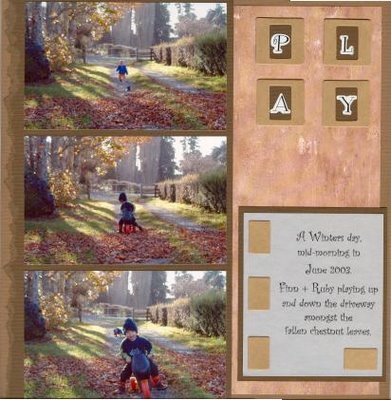 Ok so onto No.3............this was my first non CM LO + my first purchase off the internet. {never looked back since} Boy I was sooooooooo nervous doing it + worried that I wouldn't get my product. And this little number was from a Aussie shop called "The Scrap Heap". They have fantastic products + the girls are real helpful. I use to get these mthly packs called 'aussles' and at the end of each mth everyone got to vote on them but sadly i never won one but I know someone who won a few + you won't be surprised when I say who this talented little chick is........the one + only CHRIS MILLAR. And thats how Chris + I met through this site!!! So yep I was proud of this brown number + I thought I was quite cool doing the old tearing down the side.............no one teared at CM!!...........lol. Love the photos + super Kev took those!!! I have to say its strange to look at photos + Taidhg's not in them.
Now No.4 was another 'aussle'. Now the reason i love this LO is because when i was expecting Taidhg we all went on a winter hoilday over to Taupo, Hawkes Bay + then down to Wtgn. This has to be one of the best family holidays I have had so far. We did lots of cool things + we were so spontaneous, and this LO is one of those moments. We drove out to Havelock North + keep driving out to the coast + came upon this beach with the coolest kiwi baches, it was called Ocean Beach. It was a beautiful winters day + we all got out on the beach + ran up + down it {well not me with my tummy filled with arms + legs}. Also I know why i loved this hoilday as I was OVER morning sickness finally at 22 weeks!!! 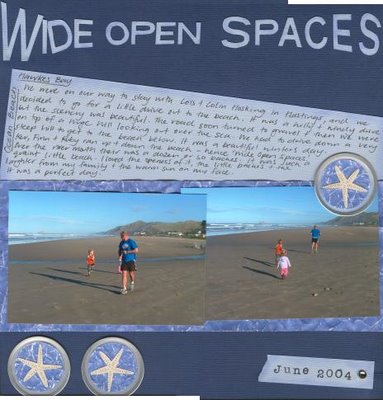 Excuse the spazzie scans!!!
And thx again girls for stopping by to comment on my work. I love it + appreciate it!!! And I would love to have a wee chat with Miss Anonymous who stopped by the other day. Plz do email me!!!
OK bloggin babes my bed calls me
Rach
ps can some one tell me if Chris still has Delys hanging off her in my links?
cheers :)
Posted by Rach H at 9:15 PM

yea dude, delys is totally hanging on to Chris or someone.. lol...

Hope Ms Anonymous turns up... I have always said someone is going to be very lucky to snaffle you up for their DT one day...

Yes, I've got Delys hanging off me!!LOL
These layouts are such a trip down memory lane for me too! Good old Aussles!
You've certainly come a long way since those layouts Rach! Fingers, toes and everything else crossed for you with your DT entries Rach!

Very cool layouts. I took so long to tear paper!! It looked too beautiful untorn and I have years of looking at plans with very straight ruled lines to shake off!!
The colours, layouts & feelings of the layouts are great. Can see why you love them.
PS - I am proud to be called a bloggin babe!!

Hi Rach - i remember that Play layout - I'm sure I voted for it :) I still love it, such great photos.

Love the wide open spaces lo - just feels wide open with the way you have designed it's shapes! Love the pics in the play lo too - so you can both do photos? That would be handy!

Love the photos in Lo no 3 just gorgeous. Its the great the way you are remembering all those little bits of info going over old LOs.
Good to see you doing some more blogging.

Hiya Rach, I remember that this layout was the first time I noticed your work. I remember thinking 'Wow how did she do that'???

Hi Rach sorry to confuse you, but I thought I should take it of as it was maybe a bit much. Anyway, pretty unreal hey, have you done your tag yet.

Have a great day rach
Carole:)