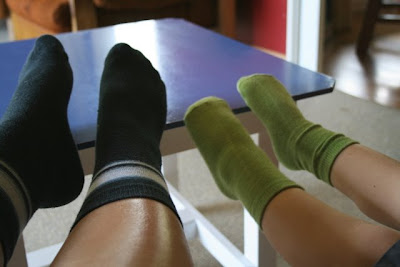 yep its cold + I so don't like it!! I have to wear more clothing!!
where is our warm march?
and already a snotty nose has appeared in our house + had 2 days of lying on the sofa!
I've been busy.
I have even pulled out my sewing machine.
And as I sat down to sew I realised it must be almost 18mths since I had used it on a LO. I think I did a over kill with sewing on the LO's back then!!
But this time I was sewing with material to make scrafs. Well it was meant to be 1 but the orders are coming in from 3 small people who thought mummy looked "cool" in her new scarf!!
And now we are adding felt!
I sew ......(hehehe......ok dumb pun but thats so me) enjoyed watching 'dancing with the stars' last night hand sewing some felt to the bottom of Ruby's scarf.
Ruby wanted a horse added to her scarf but I just couldn't get my head around a horse made out of felt that would probably turn out looking like a donkey!!
But I knew my girl loved her furry friends + remembered seeing some super cute bunnies on the Velvet Red blog class painted but Elise (oh yeah I did mention I was doing that?.........very cool btw).
So we had a go at drawing our own + made up some patterns to use on the felt.
Ruby is so awesome at drawing animals...............her horses beat mine hands down anyday!! 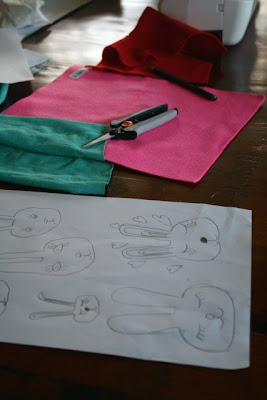 Still got some stitching to finish off. I love how these bunnies turned out + I think I will use them on something else.

Oh are you doing Elsie and Rachels course?? I so wanted to do that and almost enrolled me and one of my daughters but didn't. Please bring what you make to Autumn Escape!!! Can't wait to catch up again.!!! PS Cold here too.

I want to see your scarfs! please?

Your scarfs sound super cute, would love to see the end results! Its been hot as here the last couple of days, gone from the beginning of winter to back to summer in two days! Weird Auckland weather!